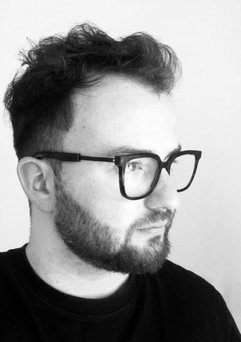 Jorden Boulet (Belgium, 1990) is educated as a painter (MFA, 2016) but works project-oriented. Both his work method and his artistic work itself can vary visually according to time, space and context: On the one hand, his artwork can take the form of playful and bombastic installations in which sand, wallpaper, inflatable ‘sculptures’ or other utensils are used. On the other hand, the saying ‘less is more’ may apply, in which for example, he shows a series of abstracted paintings in a tightly directed scenography. Yet his work is coherent because of the constant reference to the idea of paradise.

In our Western society, images of paradise are often seen as cliché images that represent an idyllic world. White beaches, palm trees, a beautiful sunset: these are visual elements that evoke an atmosphere of happiness, joy, perfection and freedom.Boulet is fascinated by this exotic visual culture and how it is used in various designs. He argues that images of paradise can be ambiguously associated or interpreted. Kitsch, decadence, superficiality or deceit are never far away.

In his art Boulet always creates an apparently idyllic and paradisiacal world, but with a twist: A depicted paradise world, which is not real. Consider, for example, the deception of advertising design, the theater of film or the impact of filtered social media. In Boulet’s imagery there is often a great distance, a façade between the spectator and the depicted paradise world. To the artist it is all about contradictions: initially beautiful dream images, but which often provoke an elusive desire and therefore carry a melancholic undertone or layering within.

Although the substantive concept often prevails in Boulet’s art, we also see the literal contradiction in his extreme use of color. Jorden Boulet himself is color blind and experiences reality in a different manner than we do. Whereas in the past his works of art were initially moralizing as a mirror against the vanity of Western society, today they are rather abstracted and simplified into fragments.

2015 - The way we look at the other space (Curator: Jolien Dirix). Begijnhof, Hasselt, BE